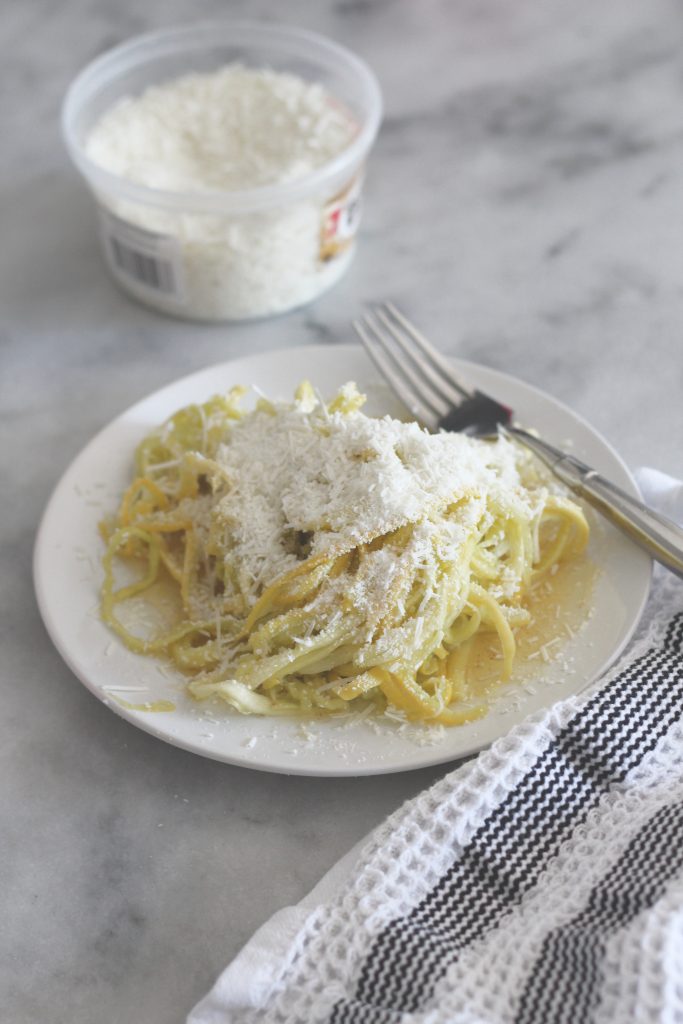 Browned butter and mizithra zoodles is the low carb version of the iconic dish from the Old Spaghetti Factory. Make this recipe at home and enjoy all the flavor without the guilt! 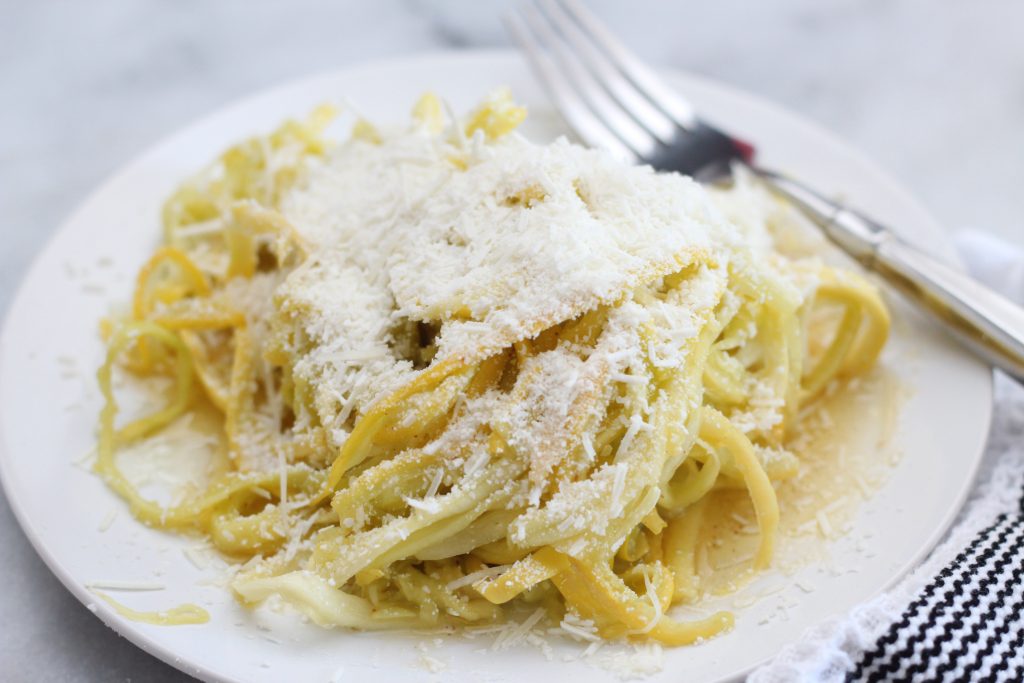 THIS POST CONTAINS AFFILIATE LINKS MEANING IF YOU CLICK ON ONE AND MAKE A PURCHASE, THIS BLOG MAY RECEIVE COMPENSATION AT NO ADDITIONAL COST TO YOU. PLEASE SEE THE POLICY PAGE FOR FULL DISCLOSURE.

Back in the day when I ate carbs, one of my favorite dishes in the world was the Browned Butter and Mizithra Spaghetti from Old Spaghetti Factory. It was like a grown up version of the pasta with butter and parmesan cheese that my daughter loves. Now, Old Spaghetti Factory isn’t a restaurant I frequented very often, but I took the kids there over the holidays and the craving for the mizithra cheese has been haunting me ever since.

I had mentioned this to my mom while we were in San Francisco a couple weeks ago. My mom was like “you know you can get mizithra at the grocery store, right?” Dammit, my mom is always right. Two days later, I was in the cheese section at Sprouts, and look what I found… 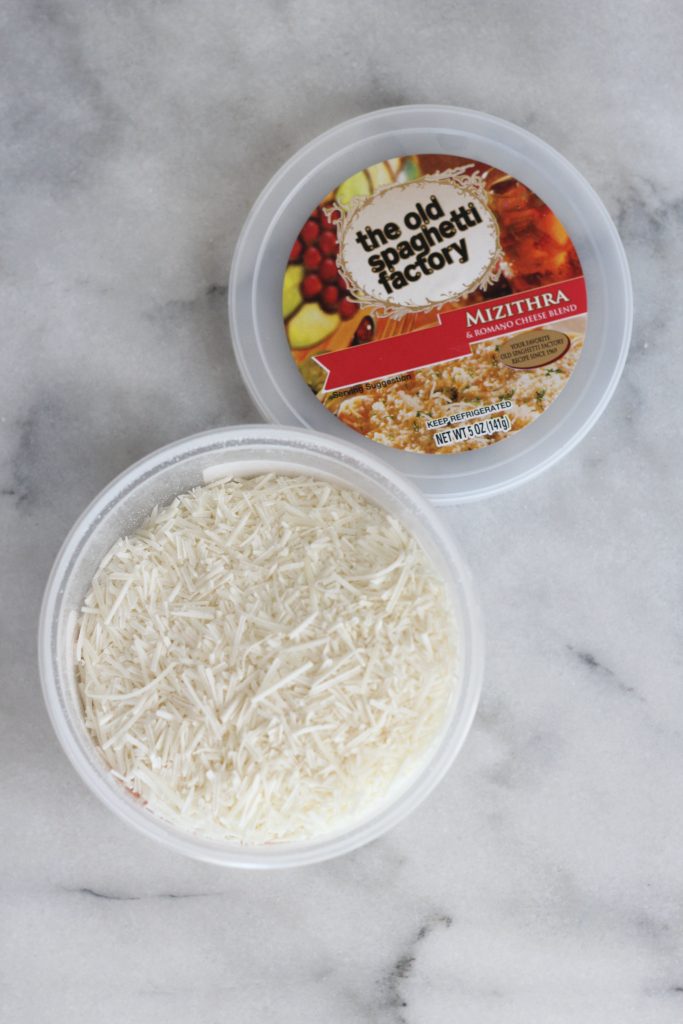 Just Take Me To The Recipe Already!

Mizithra is a Greek cheese that’s made of whey. There are three stages of of it’s processing and from what I read the first stage is sweet, the second stage is gross and the third stage is salty and hard. We are eating it at the third stage, apparently. The mizithra I purchased is pre-shredded and mixed with romano cheese. I’ll be on the look out for a round of mizithra (they have it on Amazon!) in my cheese adventures. 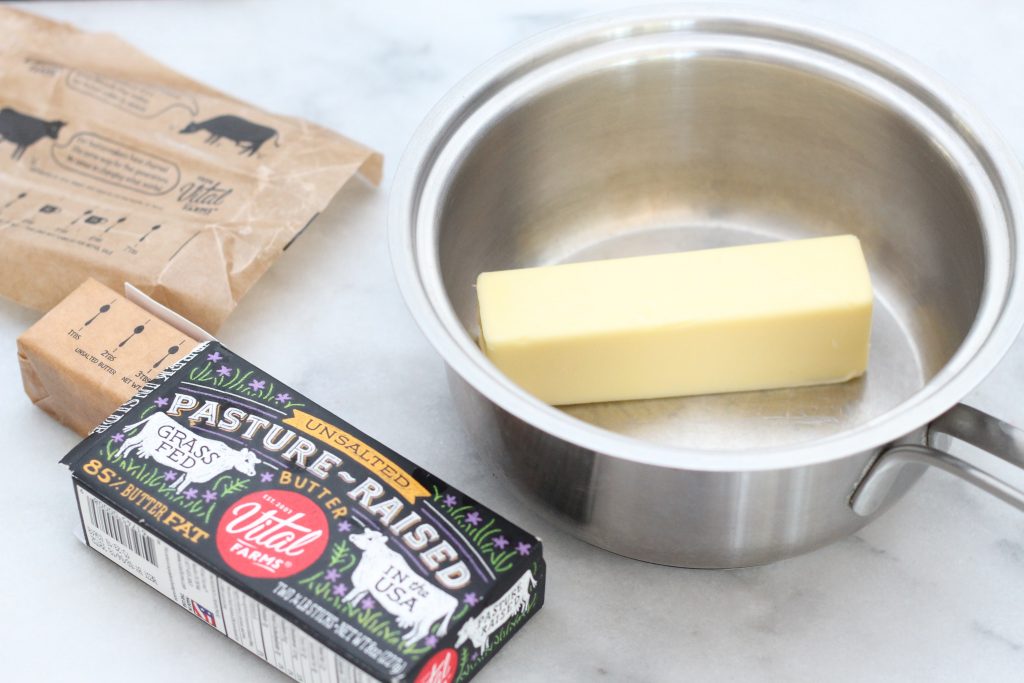 Browning butter is fun. Kind of. I’ve done it plenty of times, unintentionally. Browning butter on purpose is a completely different beast. You have to watch it, with your eagle eye. And you must use unsalted butter otherwise the salt gets trapped in the little browned butterfat and the taste is off. 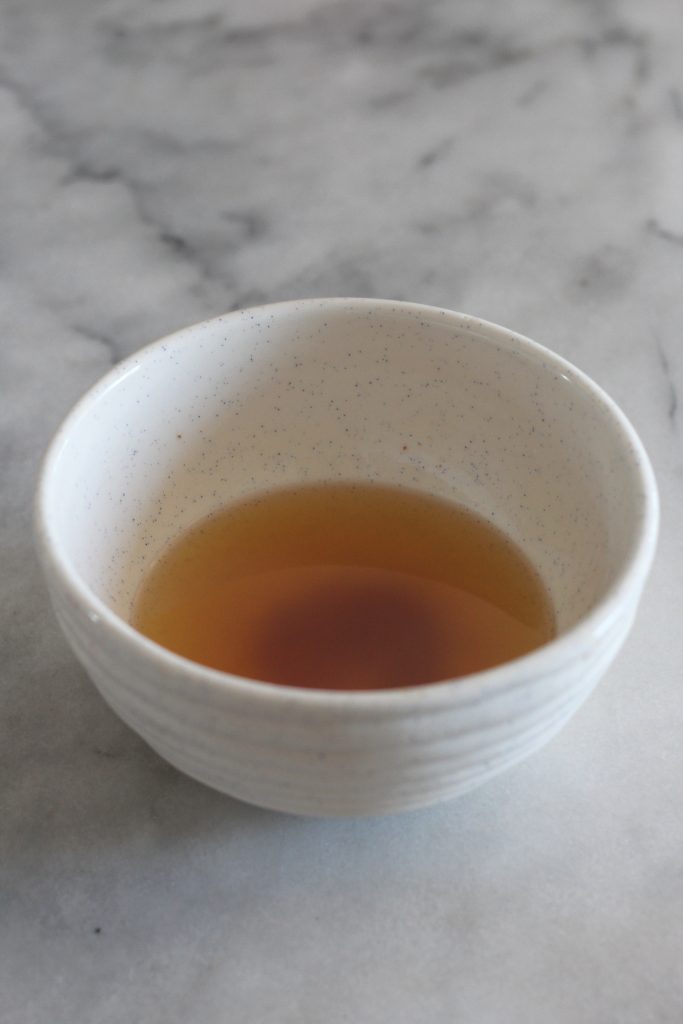 So, throw the butter in a cold pot, on medium/low heat and watch it. It will start bubbling, and that is the water from the butter cooking off. At this point, start swirling the pot. The butter will start to get a darker shade. Remove from heat just as the butter starts to turn golden-brown. You’ll be able to smell the nutty aroma. Yummmm. Chances are that you won’t use the entire amount of browned butter. Feel free to use 1/4 cup of butter instead of 1/2 a cup. I browned 1/2 a cup, because heaven forbid we run out. 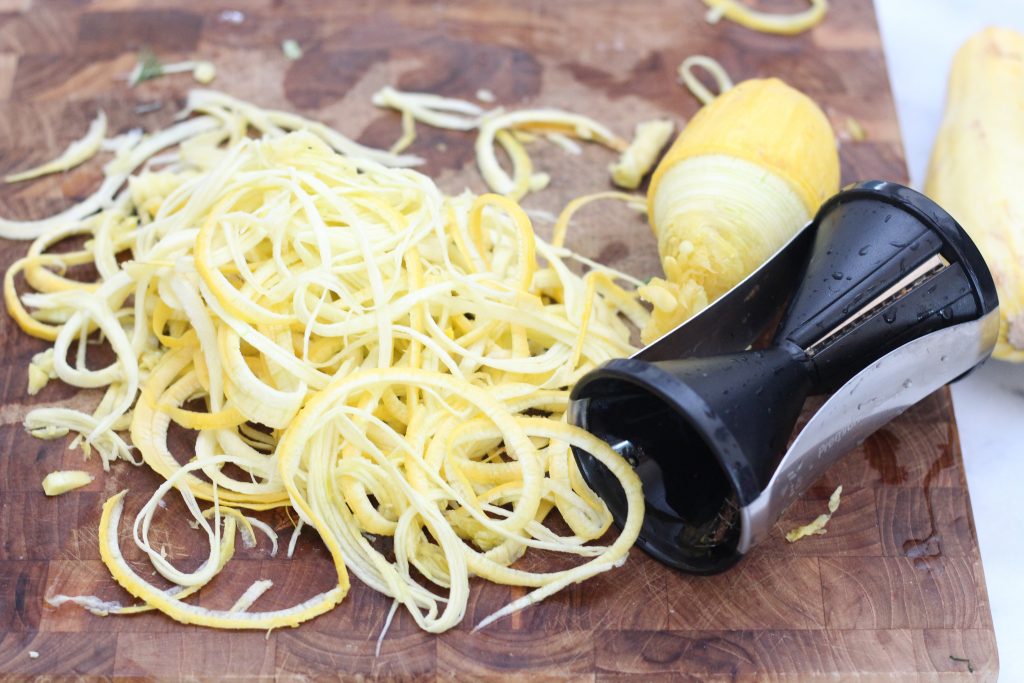 Originally, I had thought about using spaghetti squash for this recipe, but yellow zucchini is less sweet and has more of a neutral flavor, so I went with that. I use this handheld spiralizer to make my zucchini noodles. I prefer the handheld one to the bigger spiralizers that you crank because of limited storage space. The handheld one can be thrown in a drawer. 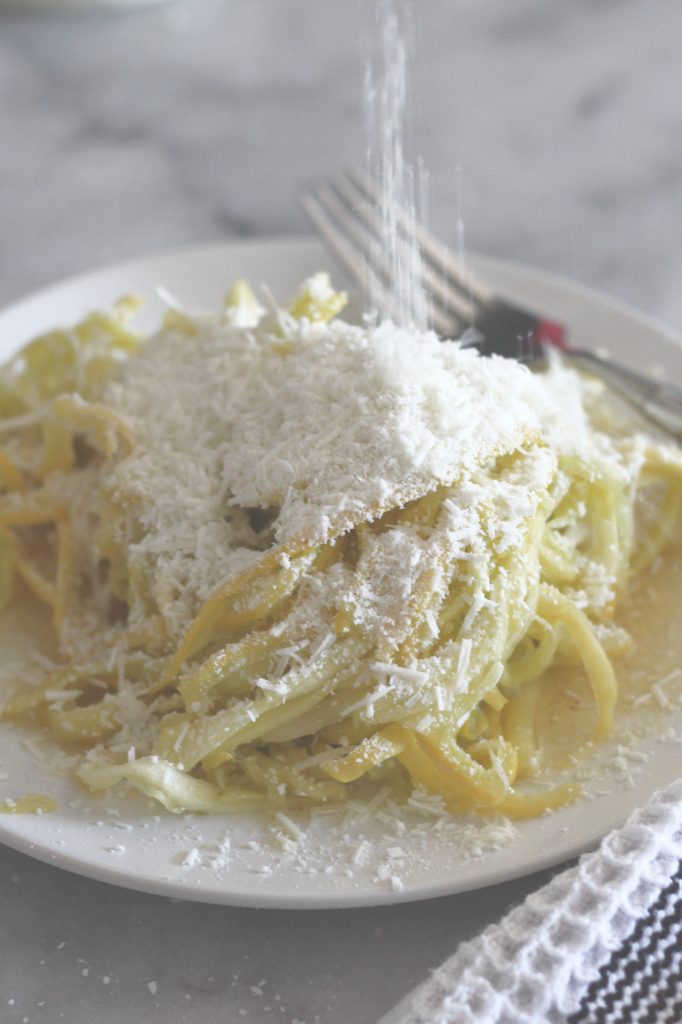 Make sure you are using firm zucchini for the zoodles. If the zucchini is overripe you are going to end up with sad, soggy zoodles. And nobody wants to eat sad, soggy noodles. Also, don’t add salt to the zoodles, it makes them sweat then makes them soggy. Whoever told you to add salt was wrong and wants you to have lame zoodles. Unfriend them at once.

Do you have lots of zucchini this summer? Then you need to make this zucchini noodles with roasted bell pepper feta sauce!

Spiralize the yellow zucchini and set aside.

In a small pot heat up a stick of unsalted butter on medium-low. The butter will melt, then bubble, then start to turn brown. Remove from heat and pour immediately into a bowl and set aside.

In a large pan, heat up a tablespoon of olive oil. Add spiralized zucchini and toss with rubber tongs in the heat. Sauté for about 3-5 minutes until zucchini appears softened and warm, but not mushy. Immediately remove from heat.

Place zucchini on plate, add 2 to 3 tablespoons of browned butter over zucchini and top with grated mizithra cheese. Serve immediately.

Enjoy this recipe! Let me know what you think!

PIN THIS SO YOU DON’T FORGET!

Helen at the Lazy Gastronome

oh man - just reading the title made my mouth water!! Pinning! Thanks for sharing at the What's for Dinner party - hope to see you next week too!

I love the Spaghetti Factory and this is one of my favorite meals to order when we go! I love the low carb option and look forward to making this! Thanks for sharing on To Grandma's House We Go and I'll be featuring you next week!

These noodles look like they would taste amazing. I will definitely be making these soon.

I love zoodles and this recipe looks good! Thanks for sharing this recipe :) and the nutritional information box is awesome! Thanks for adding that as well, it’s very handy.

I hadn't heard of this type of noodles but it sounds great! Hopefully I can try it out soon :-)

Hey there! I’m Jessa and have made low carb, high protein foods a part of my lifestyle. Following a low carb high protein diet has made such a difference in how I feel, how I sleep and pretty much all aspects of my life. I love experimenting in the kitchen and adapting recipes to fit my eating plan. I’d love for you to follow along on my low carb and fitness journey!