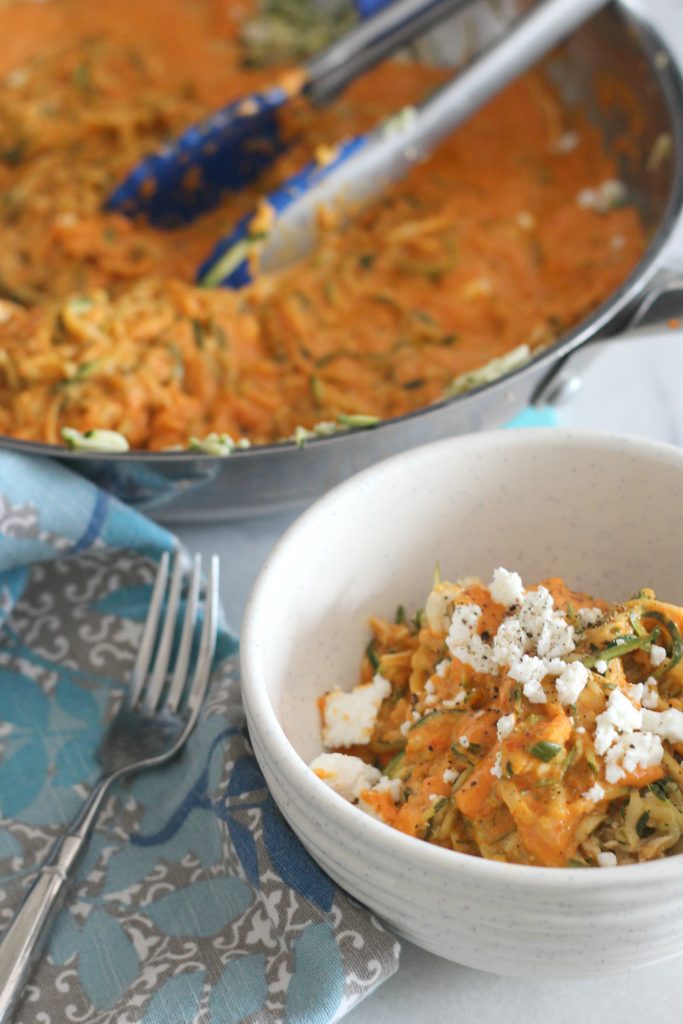 This recipe for zucchini noodles with roasted bell pepper feta sauce has become one of my all time favorites.  It’s an easy recipe and tastes amazing. 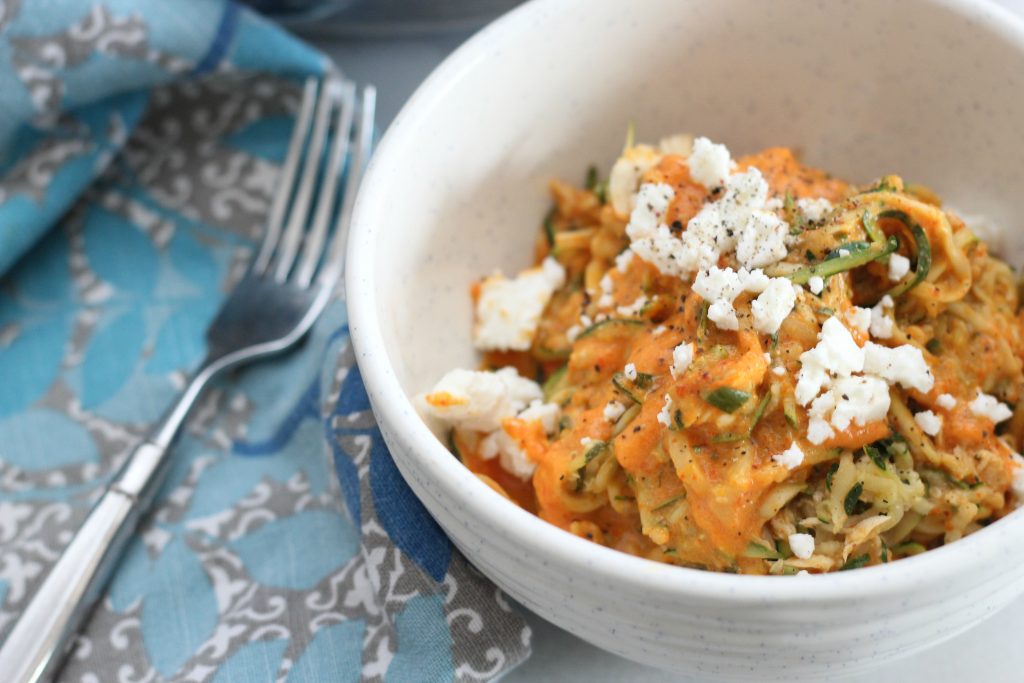 THIS POST CONTAIN AFFILIATE LINKS MEANING IF YOU CLICK ON ONE AND MAKE A PURCHASE, THIS BLOG MAY RECEIVE COMPENSATION, AT NO ADDITIONAL COST TO YOU. PLEASE SEE THE POLICY PAGE FOR FULL DISCLOSURE.

The tangy taste of the feta with the roasted red pepper is what I live for these days. You’ll need a blender or immersion blender. I’ve been saying for a couple years now that my immersion blender is on the fritz, and I need a fancier new one, but it keeps ,  Update: it died yesterday while making this dish. RIP orange immersion blender.

The funny thing about zucchini noodles is that you think you have so many, but they cook down and don’t make as much as you wanted. I found these pre-spiraled zucchini noodles at Costco. They came in two 12 ounce bags which was enough for 4 people as a meal with shredded chickentossed in. It will serve more if you are only using this as a side dish. 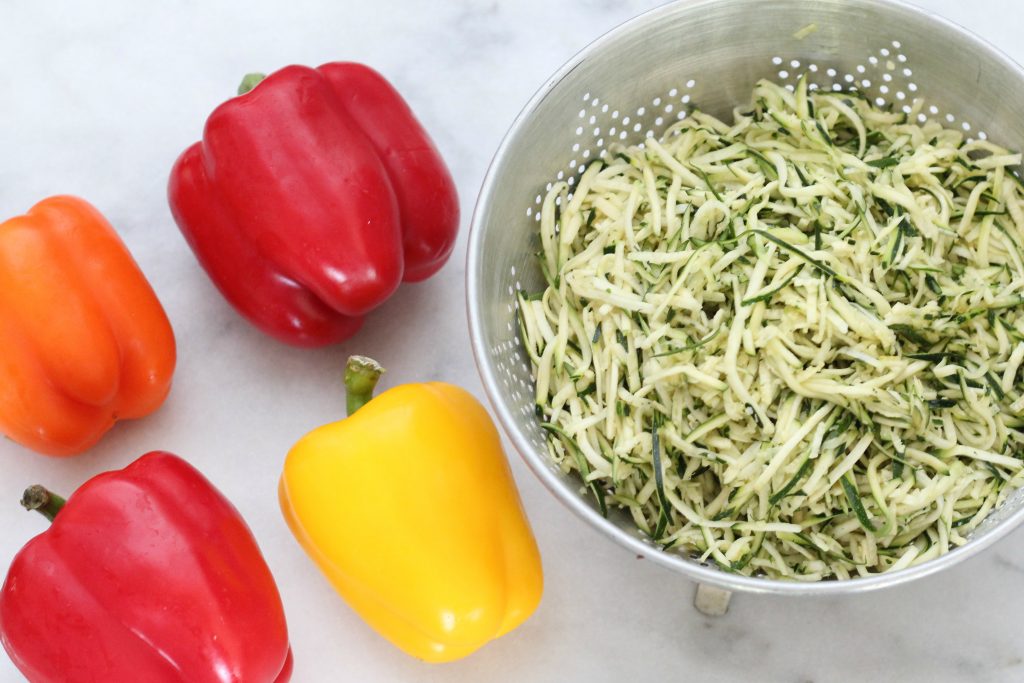 I don’t think I’d buy the pre-spiralized zucchini noodles again. Sure it was convenient, but they were a little pricey (I believe 7 dollars) for zucchini and I enjoy the spiralizing. I use a little handheld spiralizer, but I know people who love the the bigger ones that you crank. 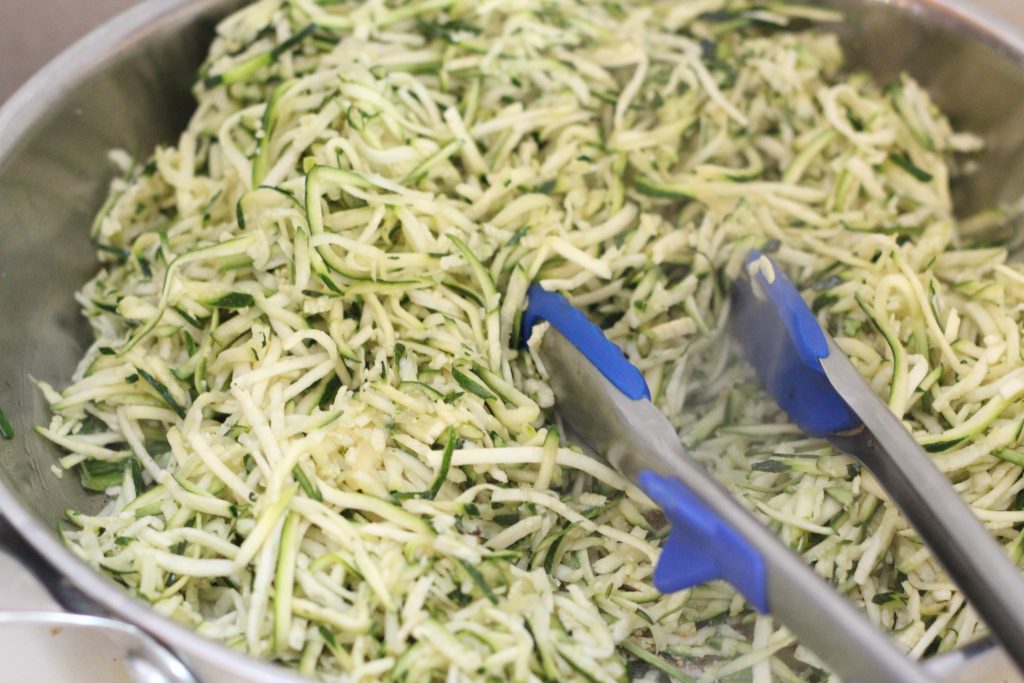 How to Roast Bell Peppers

Roasting bell peppers in the oven is so much fun. Typically, I just roast the red ones, but I figured it was time to branch out, so I roasted an orange and yellow one too. I have always roasted the whole, and then seeded and skinned the peppers after the sweating part, but I tried cutting one in half and seeding it before roasting, and I kind of like that bette. It’s a little less messy, but it’s harder to roast as evenly.

Put the clean peppers on a baking sheet and move the top rack of the oven close to the element. I have mine on the second rung, which gives the peppers about two inches of space. Turn the oven on to broil. Once the skin of the peppers start to turn brown, turn them slightly to roast another area. It’s helpful to have kitchen tongs. Keep doing this until all sides of the peppers are roasted. 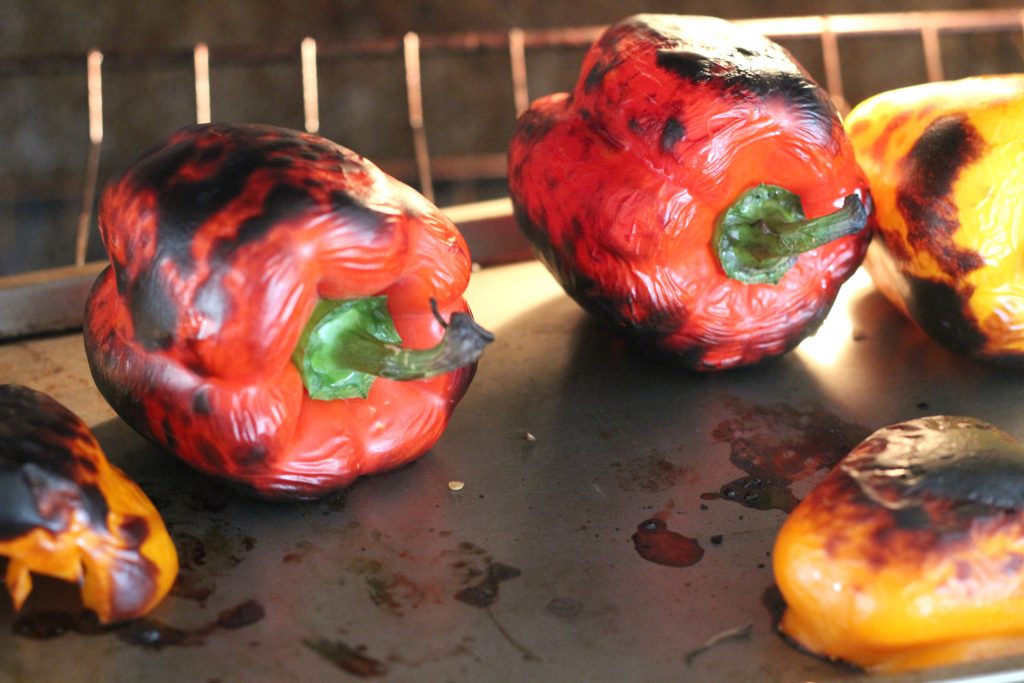 Once the peppers are nicely roasted, place them in something to make them sweat. I put them in a casserole dish with a dish towel over them and then the lid on top. I’ve used freezer bags in the past, but I know people like to avoid plastic. You can also use paper bags and foil. Let the peppers sweat for 10 -15 minutes. At that point they will be still be hot, but cool enough to handle. Cut off the stems, and get rid of the seeds and peel off the roasted skin. It will peel off pretty easily. 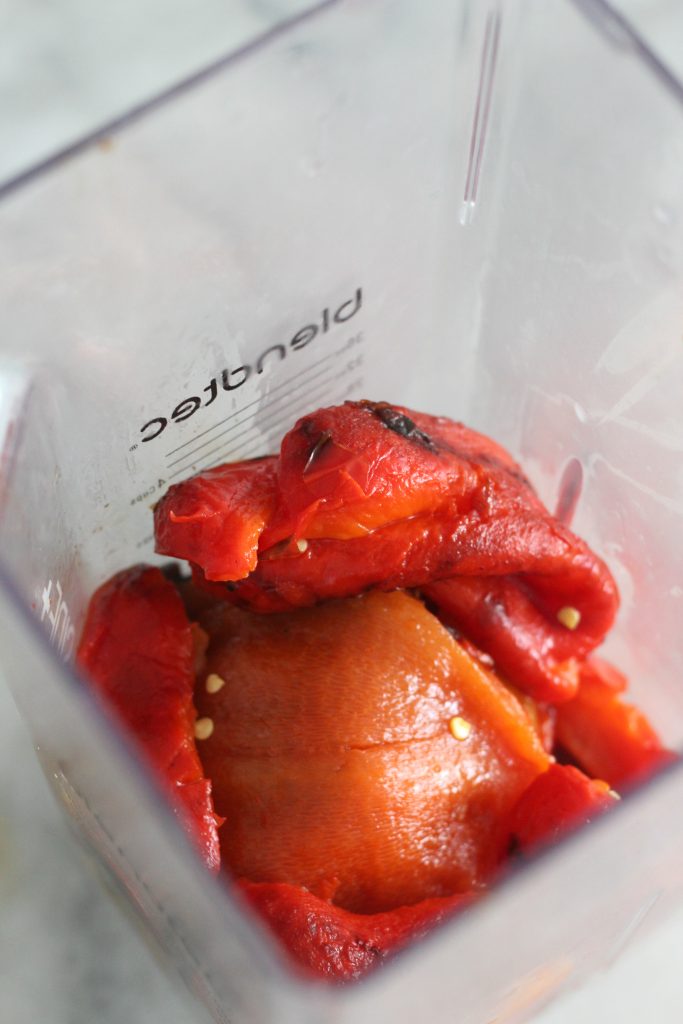 Put clean peppers on a baking sheet. Move the top rack close to the element. Broil the peppers on high, turning them with tongs, as the skin starts to brown. Once, roasted on each side remove from the oven and put into a plastic bag or a container with a lid and let the peppers "sweat" for 10 minutes. Once the peppers have sweat, peel off the skin. Place peppers, olive oil and feta in to a blender and blend until smooth.

In a large skillet, heat olive oil on medium heat. Add in garlic and onion and heat until onion starts to soften. Toss in zucchini noodles and turn heat to medium low. Heat up noodles until they begin to soften, but remove them from heat before they start to shed water. Add in roasted pepper sauce and heat.

Add any kind of protein you'd like into this recipe. I added chicken breast. This is not reflected into the nutrition count. 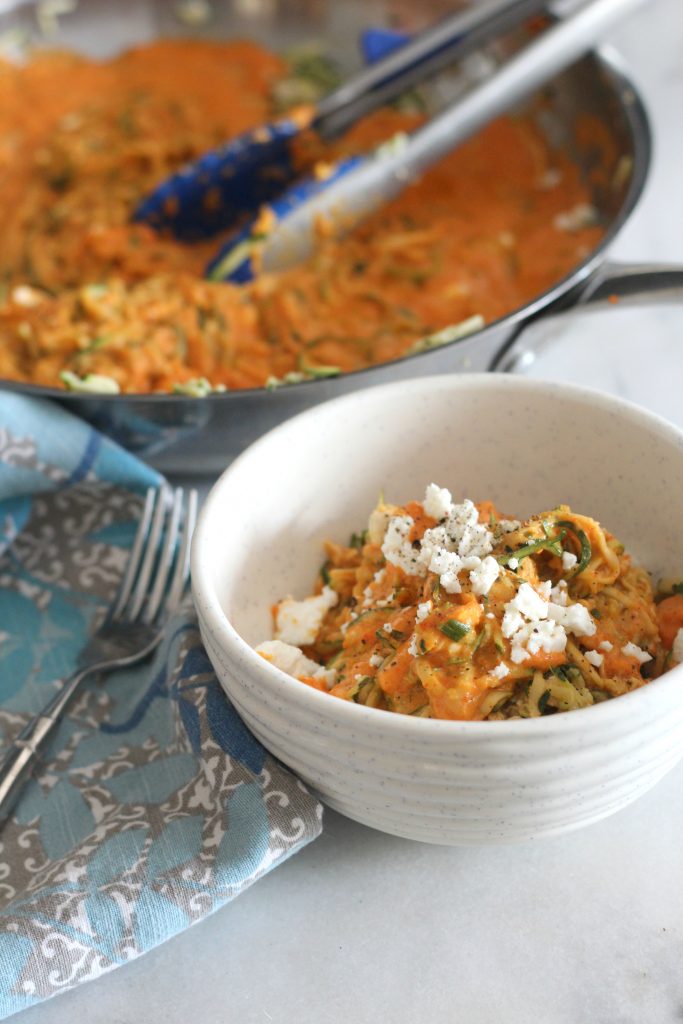 Thanks for a very delicious recipe. As a new to the cooking arena cook, I found it daunting that you spent more verbiage on your stupid emersion blender and how expensive frozen spiral zucchini was than how to make the roasted red pepper sauce. So, after roasting the peppers, do I put the peppers, olive oil and feta into a blender, blend it up and that’s it? And if so, why couldn't you at least specify that in the printable recipe directions? Please take into consideration that not all of us are fantastic cooks like yourself and have to be hand held through the entire cooking process.

Hi Annie- Sorry about that, a paragraph from the recipe disappeared. I fixed it. Thank you for pointing it out!

Love this! Thanks for sharing at Home Sweet Home!

I bet this recipe is so good. I can't wait to try it. Pinned & sharing. Thanks for sharing at the Inspiration Spotlight party @DearCreatives See you again soon.

I love zucchini noodles so much - what a flavorful way to deal with them! Thanks for sharing with Party in Your PJs!

Hey there! I’m Jessa and have made low carb, high protein foods a part of my lifestyle. Following a low carb high protein diet has made such a difference in how I feel, how I sleep and pretty much all aspects of my life. I love experimenting in the kitchen and adapting recipes to fit my eating plan. I’d love for you to follow along on my low carb and fitness journey!